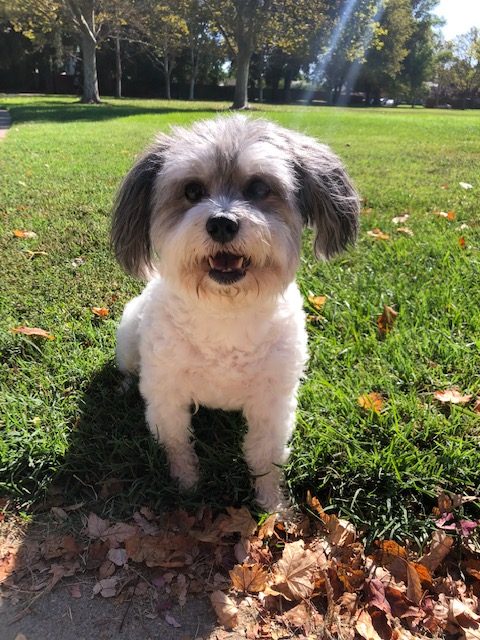 We live in a culture that opinions are a dime a dozen! We have no lack of opinion about various subject matters whether we have much knowledge about them or not. Developing opinions and critical thinking is part of our academic training, and it is a way that we show we have intelligence. However, God is not impressed with our opinions. As a matter of fact, our opinions are a hindrance to our spiritual growth and maturity. God sometimes, by His mercy, overrules our opinions to open our eyes to new possibilities and new levels of freedom.

When I wrote the last devotional, “Watch and Pray, So You Will Not Be Tempted” a few days ago, I had no idea that our dog, Bella, was sick and that she was not going to make it through the weekend. We had to put Bella down due to heart failure on Saturday. Afterwards, the Lord reminded me of the need to watch and pray for we don’t know when turbulence comes and we need to be ready to respond in the manner that pleases God. So Bella is the inspiration for today’s devotional. She was not my idea but it was God’s idea for our family, and He did it by overruling our opinion!

One of the lessons that the Lord taught me through Bella was that God’s version of “clean” and  “unclean” are very different than my ideas of those terms. I grew up in a culture that people saw dogs as unclean, so the large majority of people did not have dogs as pets. Some people used them as protection for their yards or lands. So due to lack of exposure, I was afraid of dogs and thought of them as unclean. However, my daughter is an animal person, and she wanted a dog.  She began praying for a dog for two years. Since no one in the family was interested in having one, we tried to tell her that she should give up praying for it.

Right around our daughter’s birthday, we started praying about what we should get her as a gift. Thankfully, I had a dream that we were bringing a dog home, and that changed our hearts. We ended up with a perfect dog that as my friend Carrie calls her became “an unexpected blessing!” God overruled our opinions and allowed us to have Bella. He took away my fear of dogs because of Bella. She was a companion to my daughter, and after her moving away to college, Bella became my companion. God overruled my opinion!

The Lord also overruled Peter’s opinion about the Gentiles. The difference is that Apostle Peter’s situation was of a great consequence in the Kingdom of God.

At Caesarea there was a man named Cornelius, a centurion in what was known as the Italian Regiment. 2 He and all his family were devout and God-fearing; he gave generously to those in need and prayed to God regularly……

About noon the following day as they were on their journey and approaching the city, Peter went up on the roof to pray. 10 He became hungry and wanted something to eat, and while the meal was being prepared, he fell into a trance. He saw heaven opened and something like a large sheet being let down to earth by its four corners. It contained all kinds of four-footed animals, as well as reptiles and birds. Then a voice told him, “Get up, Peter. Kill and eat.”

“Surely not, Lord!” Peter replied. “I have never eaten anything impure or unclean.”

The voice spoke to him a second time, “Do not call anything impure that God has made clean.”

This happened three times, and immediately the sheet was taken back to heaven.

While Peter was wondering about the meaning of the vision, the men sent by Cornelius found out where Simon’s house was and stopped at the gate. They called out, asking if Simon who was known as Peter was staying there.

While Peter was still thinking about the vision, the Spirit said to him, “Simon, three[a] men are looking for you.  So get up and go downstairs. Do not hesitate to go with them, for I have sent them.” Acts 10

Please read the entire Acts 10 to get a clear picture of the entire story. Peter had a skewed view of the Gentiles because of his upbringing and his cultural teachings. He considered non-Jewish people “unclean!” Jesus told Nicodemus in John 3:16 that “God so loved the world that He gave His only son…”  This was a declaration of a new order and that God was about to bring salvation to all people. He was doing a new thing on the earth. The Lord had promised Abraham that his seed was going to be blessed, and the Israelites became God’s special people. Now God was going to use Mary (a Jewish woman) to bring His own Son to the earth, so that the world through Him might be saved and be blessed eternally!

This salvation was no longer reserved only for the Jews but also for the Gentiles. Cornelius was a devout Gentile centurion belonging to the Italian regiment. This man had a heart to know God, but he did not have the revelation of Jesus Christ in his life yet. Someone needed to tell Him about Jesus!

The Lord graciously granted Cornelius’ request by working on Peter’s heart and giving him the vision of “clean” and “unclean” food three times and telling Him what God calls “clean” he should not call “unclean.” The Lord broke down prejudice in Peter’s heart and overruled his opinion of what he considered “unclean.” Peter’s revelation changed the course of history for the Gentiles. He preached the good news to Cornelius and his household,  and it opened the door for Gentiles to be reached for Jesus.

Many of us have prejudices that we hold on to as a false safety and security for us. Some of those opinions come from our family of origin, personal experiences, and cultural stereotypes. The sad truth is that many times we do not examine these prejudices against the Bible and see if God agrees with them.

I had a false idea about dogs for years, which was real to me, and I had no intention of changing it. I was comfortable believing what I believed. I felt like it protected me from harm, and I didn’t think I missed anything in life. However, by God’s mercy, He gave me a dream to overrule my opinion and to change my heart. I am so glad He did! The joy that Bella brought to our family and the fact that I was delivered from fear of dogs were just a couple of blessing from the years we had her.

I wonder how much we miss out on when we don’t let go of our opinions of some people groups. I wonder what gets missed from being done in the Kingdom of God when we remain enslaved with our opinions of people. Our opinions of what is considered  “unclean” could be related to gender, ethnicity, race, socioeconomic status, zip codes, political affiliation, etc.  Sometimes our opinions look like truth that we can count on. However, they could be the very prisons that the Lord wants to set us free from. Then we can experience greater measure of freedom, wholeness, and joy in our lives, and in turn be a blessing to those around us.