“You worship what you do not know…”! What a tough but truthful statement that Jesus made to the woman at the well! How many of us are willing to say to that someone!?

Jesus said to her, “Woman, believe Me, the hour is coming when you will neither on this mountain, nor in Jerusalem, worship the Father. You worship what you do not know; we know what we worship, for salvation is of the Jews.  But the hour is coming, and now is, when the true worshipers will worship the Father in spirit and truth; for the Father is seeking such to worship Him.  God is Spirit, and those who worship Him must worship in spirit and truth.” John 4:21-24 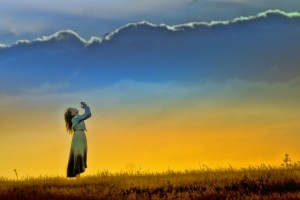 The woman at the well was searching for God. As a Samaritan woman, she was told that God could be found on Mount Gerizim. However, the Jewish people believed that God was worshipped in Jerusalem.

Jesus was trying to help this woman see that God was not going to be isolated to a location any longer. While the Jewish people had the right idea of worshipping God in Jerusalem, but God was going to close that chapter in the history of worship as well.

The God of universe, the omnipotent, and the omnipresent God is not limited to a structure or building. Although God may have powerfully visited a place in the past, it doesn’t mean that His presence is limited to a location, nor is He obligated to remain in one place!

The woman at the well was following a tradition of her forefathers. She was told about God, but she had never met the true God. She told Jesus what she had heard about worshipping God, but based on her response to Jesus, it is clear that she didn’t have a personal experience or revelation about God.

The scripture in John1:14: “And the Word became flesh and dwelt among us.” The unreachable, so called hidden God no longer chose to remain hidden from the common man. Moses, Joshua and other spiritual leaders were not going to be the only ones who were going to have a visitation with the God of inverse anymore. God came to inhabit whosoever believes in Him. He chose average people who had no lineage in priesthood to spread the Good News of the gospel and to be His ambassadors in the earth.

The Christians in the past centuries made some amazing churches with beautiful and impressive artwork as a form of worship to God. Many of those beautiful churches have turned into museums where people from all walks of life and faith come to take a few pictures and leave. There is respect for the building, but where is God!

God cannot be sought in a building. We cannot find Him in a religion, or in a tradition passed down to us. God is too big and too personal to be limited to our places of tradition, culture, or comfort.

Do you know who you worship, or are you just following the tradition of your forefathers?

I will share more about worshipping the true God in the next devotional.