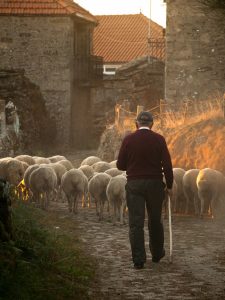 We live in times that there is a plethora of voices around us who want to offer us something that is beneficial. The problem is that many of those voices tickle people’s ears, but they are not truthful and are leading people astray by lies and deceptions.

The Voice of True Shepherds

My sheep hear My voice, and I know them, and they follow Me. And I give them eternal life, and they shall never perish; neither shall anyone snatch them out of My hand. John 10: 11-13 & 27-28

Jesus told His disciples that there were going to be hirelings among them who were not the true shepherds. These individuals were going to act like a shepherd and cause the sheep to follow them, but they were there for their own self-interest not for the benefit of the sheep.

That is what is happening in the body of Christ. There are many voices now that say the right things to attract people to their message, but they don’t really care about God’s people. They are not there to truly feed the flock or help them grow and mature in the word of God.

One of the problems is that in our humanistic culture, people want to decide what kind of messages they want to hear. Many are looking for those who can encourage them and give them an empowering message. They don’t want to hear about sin, hell, and judgment. This does not help the situation as it opens the door for more hirelings to take advantage of the people of God.

Paul told the church in Corinth that they were easily deceived as they put up with false preachings about Jesus. The truth is that the prophets in the Old Testament along with Jesus and the Apostles were very direct and truthful with the people of God. They did not sugarcoat the message to attract a following or to please men.

People still easily put up with false preachings and a different Jesus that has not being preached in the word of God. Some people are repulsed by a preacher who speaks against sin because they feel that they are being judged. The truth is that someday Jesus, the ultimate judge, will come to separate the sheep from the goats, and people should be more concerned about His judgment that than a preacher who preaches against sin.

What is bewildering in today’s climate is that Christians have come to believe that speaking against sin and unrighteousness means that people are rejected because of their sin. That is not the truth! The reason that the gospel is good news is because it tells us that we are sinners in need of forgiveness that Jesus bought for us. If we were not sinners in need of forgiveness,  then there was no need for the good news of redemption.

Jesus came with the purpose of salvation that no man should perish. He did not come to condemn the world but to bring life and freedom from the bondage of sin (See John 3:16). Do people really think that Jesus went to the cross to keep us the same!? Jesus spoke out against sin while he loved the people. Are we supposed to apologize for His work on the cross? Is it right for us now that we have been set free, to go back to sinning? Or how dare we preach a different Jesus when we have felt His touch and have a testimony of the transformation that He has brought in our lives!? Would God be pleased with His people if they preached a message that sugarcoats sin in order to avoid offense and rejection!?

Jesus declared that the true shepherd lays down His life for the sheep. The true shepherds of our day will have to have the boldness and the courage to speak the whole truth and do the right thing even if it means that they will suffer for it. Sometimes that suffering and rejection will come from the body of Christ. At other times, it may come because of the cultural or legal opposition to the message. Nevertheless, true shepherds are willing to stay true to the message in order to see lives being spared.

When Jesus asked His disciples who did the people think He was, there were many opinions, but Peter had the right answer ( See Matthew 16:13-17). He declared that Jesus was the Christ and the son of the living God. Peter had been paying more attention to Jesus’ words, actions, prayers, and miracles than all the other opinions around him.

We also need to be very clear about who Jesus Christ is and not be swayed by the voices around us. These voices want to remove truth and add lies to the Jesus in the Bible. Some do not believe that Jesus was sinless. Others think of Him as just a good teacher and a prophet. Some do not believe in Jesus’ deity. We need to rise above all the voices around us and recognize the voice of the true shepherd and not consume any message that is not about the true Christ whom we know through the Bible.

I hope that we can stay true to what the scripture tells us about Jesus and put our hope fully on His work on the cross, His indwelling presence through the power of the Holy Spirit, and His glorious return. Let’s pray for courage that we would not deviate from the message of gospel for it is the power of God unto salvation (See Romans 1:16)!

Image by António Cascalheira from Pixabay