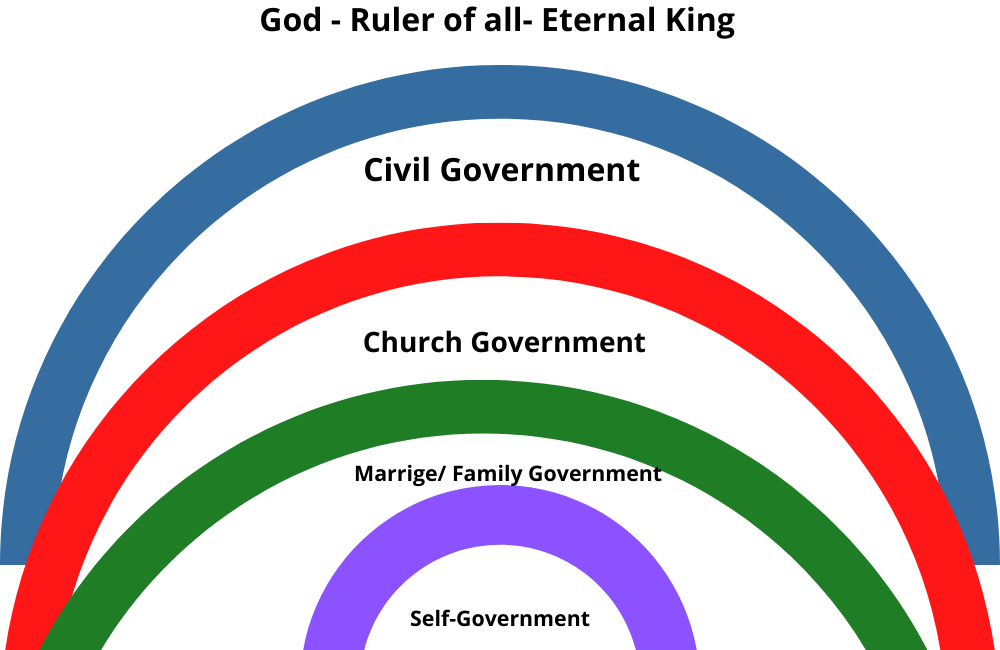 God has established order in the world by various spheres of governance that He has placed on the earth. The better we understand his spheres of authority and value them for their intended purpose, the healthier our society will become.

The above picture depicts the various spheres of government in society. Government begins with people governing themselves first, and then it extends into larger spheres.  Every sphere of government impacts the other spheres. If we fail in the smaller/closer spheres of government such as self-government and marriage/family government, it opens the door for evil and confusion, and it also allows the civil government to intervene in the affairs of people. For example, a child who has not learned self-governance at home, can potentially cause problems at school, work, and in the neighborhoods, and eventually be faced with punishment by the civil government for disobeying the law. If we want less intervention by government in people’s affairs, we need to help individuals and families to become healthy and strong.

Self-government is the key essential governance, which all the other governments are established upon. After the fall of Adam and Eve, sin entered the world, and humanity became bondage to sin and darkness. While people have a conscience, sin has marred the conscience. Hence, much of what a person determines good or evil is dictated by their upbringing and the environment that they grew up in. As a result, humanity does not have a standard of morality, so the civil government defines good and evil as the lowest common denominator. In the case of U.S., the voice of majority in America makes that decision.  However, for the people of God, our moral standard comes from the Bible.

Praise God that the Lord sent His son to forgive us of our sins and to give us a new nature. The Lord knew that man is not capable of keeping God’s moral standard, so Jesus’ death and resurrection paved the way for humanity to have hope for change and transformation.

After salvation, we begin to self-govern according to the word of God! Jesus gave us a new identity that is based on His work on the cross not on our past and/or accomplishment. We no longer have to defend ourselves or be ashamed to appear flawed. This truth should cause every believer to be secure in their lives. We should be forerunners in society for taking responsibility for our actions whether good or bad. We should show courage and not blame others for things that we are responsible for. This keeps us as people of integrity before God and before man.

Can you imagine a world where believers obeyed God and did what the Bible teaches them to do!? We would become better spouses, parents, employees, employers, friends, neighbors, etc. We have the potential to be shining lights in the midst of a dark world. Are you a light to the world around you?

This brings us to the next sphere of government, which is marriage/family government. Marriage is God’s idea. He designed it with His wisdom and for His purpose. People will continue to attempt to redefine marriage, but that does not change the truth of God’s design and purpose for marriage. The more we are in line with God’s heart on the issue of marriage, the greater stability in our lives, and the more peace and satisfaction in our relationships.

Every healthy society is established upon healthy marriages and families where each family member is loved, nurtured, valued, and taught proper personal responsibility (self-governance). For Christian marriages, it is essential that couples relate to one another in a loving and God-honoring manner, and they teach honor, love, and proper boundaries to their children.

When children are raised in homes with safety, love, and boundaries, they have a greater chance to self-govern themselves successfully. Then they are not a problem in school, at work, or in society. Instead, they become a contributor to the health of the society by being a good and responsible citizen.

Marriage is a life-time decision, and individuals should be encouraged to take their time to seek God and allow Him to lead and guide the relationship. Every believer should do the hard work of addressing their past hurts and issues and seek the freedom that Jesus died to give them. This allows them to go into a marriage healthier. As a married couple, it is never too late to begin being discipled. We should be humble enough to ask for help and seek someone to mentor us.

Divorce has had great spiritual, emotional, and financial cost to everyone involved in our society. Single parents and their children make up 1/3 of those who live in poverty according to an article by Washington Post.  If we work on this issue with the help of the church and Godly counsel, we can eliminate some of the problem of poverty without looking to civil government to come to the rescue.

Can you imagine the success of Christian marriages if they followed God’s precepts and allowed the Lord to lead and guide them!? First, we would not have a large number of divorces in Christian homes and, consequently, less pain, hurt, and financial hardship. Secondly, we would have a greater influence in society to show that God’s idea of marriage works!

The church is the bride of Christ, and she needs to be ready for her bridegroom’s return. This readiness comes through discipleship, building relationally, growing in maturity, belonging to a spiritual family, and being equipped for the work of ministry that each person has in their sphere of influence.

The church is not meant to be a big and fancy building where thousands of people show up as a spectator. The church was never meant to be like a sporting event. The church is about developing disciplined followers of Christ.  This is the place where the orphans in the world find a spiritual family. The church becomes the place of healing, acceptance, and growth. When the church does what is it supposed to do Biblically, it becomes a place of refuge and a shelter from the storm. People will be drawn to it to get the help they need. Struggling couples will come to seek advice for their lives.  The church becomes powerful in the society, and it even becomes a place where local leaders can seek wisdom and counsel to help them in various decisions.